You may not immediately associate Latin America with luxury, but it’s home to some of the most spectacular hotels on Earth.

From jungle-clad hideaways to boutique beachfront retreats, and palatial inner-city gems to all-inclusive lodges in the desert, each has its own vibe and sense of place that makes it unique. We know Latin America and can tell you where to stay for amazing views over the Iguaçu Falls, the sleekest eco-lodge in Ecuador and ultimate National Park views in Chile. Here are 10 of our favourite luxury Latin America hotels.

This heritage heavyweight helped put Rio de Janeiro on the map in the early days of tourism and lies just steps across the road from its world-famous namesake beach, with spectacular views. Belmond Copacabana Palace has an instantly recognisable Art Deco façade and a typically Belmond classic style – think high ceilings, marble floors and shimmering chandeliers. Since opening in 1923, it has welcomed everyone from Presidents to Hollywood icons, and music stars including The Rolling Stones have played concerts right outside. You can lap up some serious VIP treatment here with a botanical spa, a swanky Piano Bar, a Michelin-starred restaurant and Rio’s only rooftop tennis court. 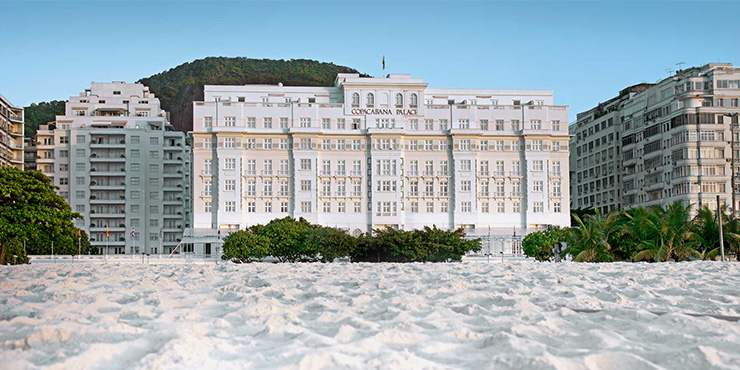 950 metres above sea level on an Andean Cloud Forest plateau, around three hours from Quito, you’ll find this incredible eco-lodge. It was built using polished materials including stone, steel and floor-to-ceiling windows, and once you’re inside it’s like being in a luxurious bubble at the heart of the rainforest. A stay at Mashpi Lodge is a once-in-a-lifetime experience and all about sustainable exploration; excursions are included in the cost, there’s a panoramic terrace for early-morning birdwatching and an active research station on site. Hop on board the Dragonfly, a cable car-gondola which whisks you through the forest canopy, before drinking in endless views of green from the two-storey Dining Room. Tierra Patagonia is on the boundary of Chile’s Torres del Paine National Park, 20 minutes’ drive from the entrance. It’s set back from the shores of turquoise Lake Sarmiento with spectacular views over the park’s iconic peaks and windswept landscape, yet the beautiful timber building still blends effortlessly into its surroundings. Your stay here will be All Inclusive and active – spot stunning Condors on excursions and explore the terrain on foot, bicycle or horseback and in a 4x4. Make the most of the indulgent spa and fantastic lounge – you won’t have Wi-Fi or a TV in your room, so head here for Gaucho-style cuisine, signature Calafate Sours, a striking fireplace and large panoramic windows. The only thing you’re likely to hear outside is Patagonia’s famous wind, but the remoteness is what makes this hotel so special. As its name suggests, The Singular Patagonia is a unique hotel. This former 20th-Century sheep-processing plant is just outside Puerto Natales and was key in the development of the port city, before being abandoned for years, declared a historic monument and then spectacularly renovated. Guest rooms are in the adjoining glass and iron annex, while the huge original building contains various materials from the UK, including machinery still in situ. Head to the incredible restaurant for Patagonian hare, king crab, white strawberries and fine Chilean wines, all included. The hotel’s location is stunning, too; on the eastern shore of Última Esperanza Sound and a gateway to the Torres del Paine National Park – go horse trekking through the breathtaking Laguna Sofía Valley or kayaking through mighty fjords. This heritage building at the heart of Cuzco was originally an Incan ceremonial site before being converted into a superb monastery-mansion by the Spanish Conquistadors in 1533. It has the character to rival any art gallery and history at every turn – guest rooms have their own individual antiques and features, from grand wooden doors to elegant shutters. For food and drink, Palacio del Inka is big on Andean ingredients; tuck into an awesome breakfast spread overlooking the colonial-style courtyard, and go cheese, wine and meat tasting in the quirky cellars. The hotel is opposite Coricancha, Cuzco’s famous Temple of the Sun, and just five minutes’ walk from the Plaza de Armas but, despite its central location and large size, it still has a private boutique feel. 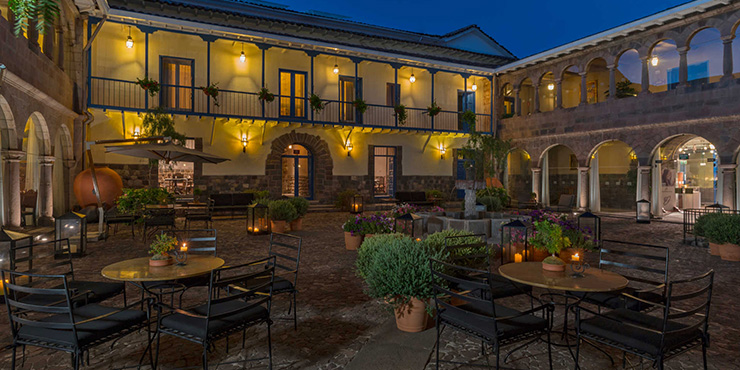 ‘Das Cataratas’ refers to the incredible Iguaçu Falls on the Argentina-Brazil border. This is one of only two hotels overlooking the falls and the only one within Brazil’s Iguaçu National Park. The hotel is in a superb location, just a short stroll from the Brazilian side of the falls along a winding forest walkway, home to enchanting wildlife including toucans and butterflies. Guests at Belmond Hotel Das Cataratas have exclusive after-hours access to the falls both morning and evening, so avoid the crowds and make the most of this Instagrammable hot spot. After a day of guided rainforest tours and helicopter trips, enjoy exceptional service and exquisite Churrasco-style cuisine back at the beautiful colonial-style hotel.

This contemporary all-inclusive lodge is on the outskirts of San Pedro de Atacama, a charmingly rustic town in the Andes Mountains. It has just 32 rooms and an ultra-chic indigenous style, with sleek wood, elegant stone and a decked pool area where you can sprawl on a thatched lounger and soak up sweeping views over the rusty-red Atacama Desert landscape. Eco-friendly Tierra Atacama promotes effective water management (you’ll be given flasks on arrival and there are no plastic bottles) and uses local ingredients. So grab a glass of Chilean wine or craft beer at the bar and enjoy  breathtaking views over Licancabur Volcano in the distance – the mountains go through a whole kaleidoscope of colours from morning to night. 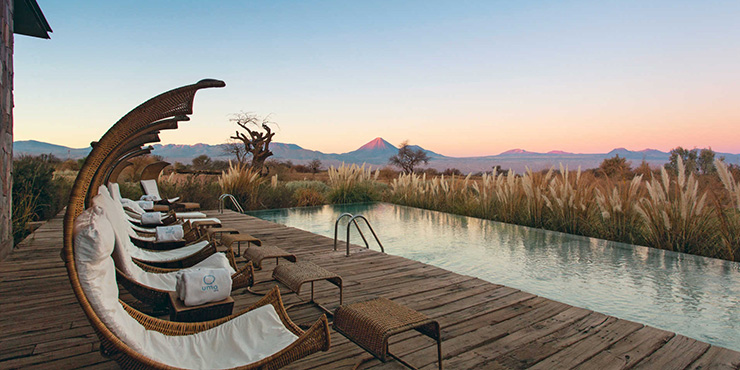 UXUA Casa Hotel & Spa is nestled in the former fishing village of Trancoso, home to over 15 miles of pristine coastline. This boutique hideaway is unorthodox to say the least; you’ll be staying in a colourful collection of casas which have been repurposed from 16th-Century fishermen’s huts, filled with timeless antiques and authentic features ranging from thatched roofs to tree trunk sinks. There’s no traditional façade, either – instead, you’ll be able to stroll out from your room down to the upmarket quadrado, a UNESCO-protected square which is blissfully free of traffic and has a pretty white-washed church. This converted convent from 1621 is in Cartagena, a historic walled port city and UNESCO World Heritage Site on Colombia’s Caribbean coast. Santa Clara’s style emulates that of Cartagena, with a courtyard-atrium area housing the pool and overlooked by superb colonial balconies. Gabriel García Márquez used this distinctive hotel as the setting for his novel Of love and other demons and you can tour his former house just next door, before sinking into an irresistibly plush bed in your rustic-chic room – the best suites pay homage to famous Colombian artists including Fernando Botero and come with 24-hour butler service. 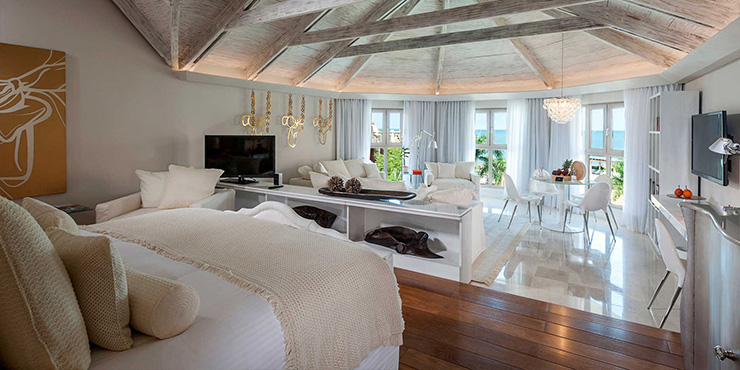 For a cosmopolitan taste of Latin America and one of Argentina’s most luxurious hotels, Palacio Duhau is a fantastic choice. It’s a restored Belle Époque-style palace built in 1934 at the heart of Recoleta, Buenos Aires’ stunning French district; Argentinian sweetheart Eva Perón is buried in the district’s cemetery, and you may well do a double take as you browse the area’s Parisian-esque boulevards and al fresco cafés. Indulge in incredible cuisine at three restaurants – options range from Wagyu and Black Angus beef to Sunday brunch in the garden, before unearthing the hotel’s hidden secret, an art-lined underground passageway which links its heritage and modern wings. This feature was published on 20 September 2018. The information within this feature is correct to the best of our knowledge at the time of print. Feature by David Assender.